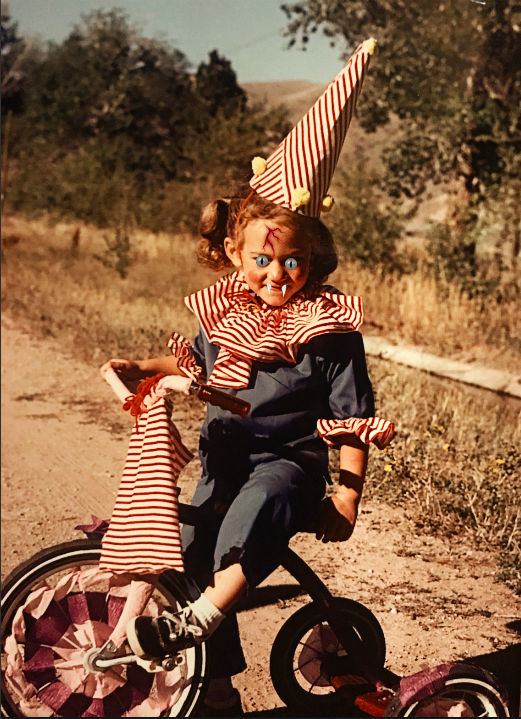 Something about the two boys on the sidewalk outside my house seemed odd.  They walked slowly, shoulder to shoulder, like Tweedle Dee and Tweedle Dum on downers.  Same height, same build, brothers maybe, perhaps twins, they stared at my house as they passed.  I stood in the middle of the front room, watching them.  I thought maybe my cat was outside and they might do her harm. Ready to react, I moved closer to the door.  Maybe 12 or 13-years-old, they were husky lads with blank expressions. They moved past my house, gazing to their right at my neighbor’s house with the rock yard. They stopped.  My cat often perches on the neighbor’s rocks or porch.  I was ready to save her should these boys decide to attack.

They turned, still connected at the shoulder, and faced the house next door.  An image of The Shiningtwins flashed through my mind. Their lips moved and their heads came together in a quick conversation before one bent forward to grab a rock.  I reached for my doorknob, then the boy straightened and dropped the rock.  They conversed again and looked around to see if anyone was watching.  Then the same boy bent forward, grabbed the neighbor’s “Do Not Solicit” sign, ripped it out of the ground and threw it on the rocks.  They looked around again and turned to leave.  That’s when I threw open my front door and stepped out.

They didn’t flinch or run. They turned in unison to face me, silent.  I stayed on my porch near the door in case they bared fangs and decided to fly at me.

The boy who had done the damage stepped forward.  “It didn’t make sense.”  Ah, a learning moment.  My teaching instincts kicked in.

“Read it,” I commanded. The kid picked up the sign and read slowly.

“No the Moneysaver, no the Market.”

The boy wasn’t wrong. To someone unfamiliar with those free publication, the wording wouldn’t make sense.  Maybe the kid was a budding English major.

“That means he doesn’t want anyone to throw those papers on his property.”  I didn’t go into great detail about how the papers litter many a yard and sidewalk in the neighborhood, or the fact that the publishers waste trees at an abominable rate.  I did continue to chastise.

The kid picked up the sign and stuck it back in the ground as the other boy stood by and watched, hands by his sides.  The young vandal then stood and looked at me, waiting for instruction.

I shooed them away.  “Go on,” I said.  He turned and faced his partner in crime and the other boy whacked him hard on the shoulder.

All I could think was, “The Children of the Cornare on the sidewalk outside my house.”  What was going on?  Were they daring each other to commit atrocities for some sort of power ranking?

The two boys took turns swatting at each other and arguing over who was weak or strong as they ambled to the end of the sidewalk.  I stared in utter bewilderment as they mumbled to each other, shoulder to shoulder, then crossed the street at a kitty corner to traipse across someone’s yard. Looking around, I saw no one outside in the neighborhood.  There were no onlookers to witness this uncanny valley in which I found myself.  Surely, this was a scene from the Twilight Zone.

I finally re-entered my house, locking the door behind me.  I kept the blinds open the rest of night, continuously checking to see if the Tweedle-Dees-and-Dums-from-hell had returned to kill me or at least throw a rock through my window.

With the exception of my son and my adorable nieces and nephews, I’m not fond of children. Surprisingly, they seem to like me. It could be karma, or maybe it’s because I don’t talk down to them.  Kids have a way of knowing and sensing things much more quickly than we adults give them credit for.  And babies are the scariest.  Whenever I make eye contact with a baby, I have this feeling they can see into my soul. In my head, I can hear them say, “I know your secrets.”

Yes, babies frighten as much as fascinate me.  All kids do. Earlier the same day as my close encounter, I had spoken with a friend who is an Occupational Therapist.  She’d had a rough day and was lamenting about working with her pediatric patients; they were the hardest part of her job.

“Their behaviors are scary,” she said, drawing out the scaaaaarrrrryyyy.  Just that morning a five-year-old had told her he wanted to shoot her.  My mouth dropped hearing this.  What kind of kid says something like that?  Well, any kid who plays video games, watches the news or gets on social media is likely to hear about or see someone shooting or being shot by someone else on a daily basis.  So how do we as adults, role models, parents, leaders and teachers begin to talk to children about right and wrong, good and bad, truth and lies?

Everyone has an opinion on parenting.  There’s good parenting, bad parenting, no parenting, and everything in between.  Even the best parent can end up with a serial killer in the family, and serial killers can end up spawning future humanitarians.  So, is it just a roll of the dice as to how our progeny will end up behaving?  Maybe.  But we can still teach, model, and inspire good behaviors.  We must.  The survival of our species depends on it.

I hope the Twins of the Corn mosey by again.  When they do, I’ll stop them, introduce myself and ask their names.  I’ll start a conversation with them to get a sense of who they are and what they like to do, when they aren’t destroying cryptic lawn signs. Maybe I’ll give them a few ideas about how they can become model citizens when they grow up.  Then I’ll bid them good day, enter my house, lock my door, remove my Kevlar vest, and relax.